BOSTON, April 9, 2020 /PRNewswire/ -- Massachusetts residents are radically changing the way they access medical care, according to the latest wave of a Massachusetts tracking poll which found a more than 200% rise in the use of telemedicine. 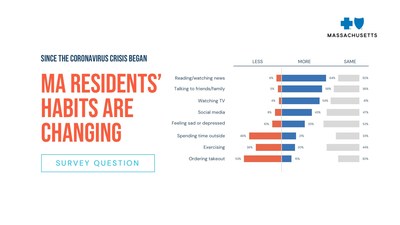 The share of residents who say they have used telemedicine since the onset of the crisis has increased steadily over the four waves of the tracking poll, from 8% in the initial survey three weeks ago up to 21% in the most recent data.

This aligns with an April 7th report in The Boston Globe noting providers like Massachusetts General and Brigham and Women's Hospitals are conducting between 70-76% of their outpatient visits via telemedicine or by phone, a dramatic increase from the 1-3% typically conducted virtually.

The increase comes as health plans across the Commonwealth have acted quickly to make telehealth services more accessible so patients can receive care from home and limit the risk of contagion. For example, during the state of emergency, Blue Cross is waiving member cost share (co-pays, co-insurance and deductibles) for all medically necessary medical and behavioral health covered services with in-network providers and reimbursing at the same rate as face-to-face care for participating providers for both medical and behavioral health care that meet clinical standards, in accordance with state guidelines.

Expanded access to behavioral health services via telehealth could prove to be crucial as the latest wave of the survey notes 33% of respondents report feeling sad or depressed more frequently since the crisis began.

"We cannot ignore the impact this crisis is having on our mental health. Improving access to care by waiving copays for virtual behavioral health appointments is critically important," said Ken Duckworth, MD, associate medical director for behavioral health at Blue Cross. "All of us can benefit from coping strategies like being mindful of our news consumption, finding ways to help others and practicing self-care. But having access to mental health services can be even more important in moments like these."

The survey also finds that maintaining a healthy routine during quarantine has been a challenge for many residents:

"Economic, health, educational, and everyday challenges are hitting residents all hitting at once," said Steve Kozelek, President of The MassINC Polling Group, who oversaw the poll.  "People are getting through this any way they can."

Despite the challenges, the vast majority of the public supports restrictions on public gatherings and business, with only 6% saying the reaction has gone too far. Most say the reaction has been about right (64%) or could go further still (28%).

The findings are part of the fourth and final wave of data from a statewide tracking poll (conducted March 30 - April 5) on the coronavirus sponsored by Blue Cross Blue Shield of Massachusetts and conducted by The MassINC Polling Group. The survey monitors key elements of public opinion and reaction and was commissioned as part of Blue Cross' broader efforts to support the community's response to COVID-19.

In response to the COVID-19 pandemic, Blue Cross has expanded coverage and access to care for its members, and launched a regularly updated resource center that includes information about how to stay safe, a downloadable tip sheet for employers, a video featuring a Blue Cross physicians, and answers to frequently asked questions. In addition, Blue Cross' health news site, Coverage, produces timely, original news articles reporting what health consumers need to know about COVID-19 and profiling the health care providers on the front line.

Full survey results can be found here and here.

Methodology
These results are based on a statewide survey of 1054 residents of Massachusetts. Live telephone interviews were conducted March 30 - April 4, 2020 via both landline and cell phone as part of a tracking survey. The final data was weighted to known and estimated parameters on gender, age, race, county, and education. The margin of sampling error is 3.0 percentage points with a 95 percent level of confidence.

About Blue Cross Blue Shield of Massachusetts
Blue Cross Blue Shield of Massachusetts (www.bluecrossma.com) is a community-focused, tax-paying, not-for-profit health plan headquartered in Boston. We are committed to the relentless pursuit of quality, affordable health care with an unparalleled consumer experience. Consistent with our promise to always put our members first, we are rated among the nation's best health plans for member satisfaction and quality. Connect with us on Facebook, Twitter, YouTube, and LinkedIn. 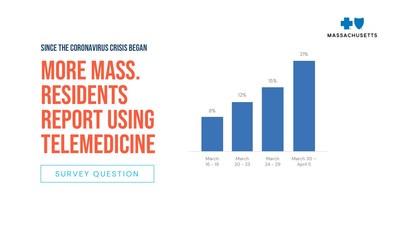