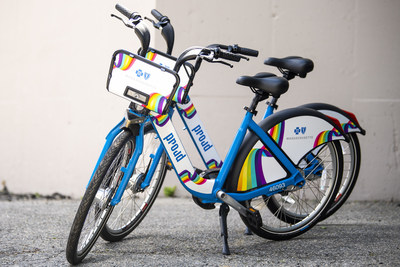 BOSTON, June 7, 2019 /PRNewswire/ -- To celebrate 2019 Pride Week and in anticipation of the Boston Pride Parade on Saturday, June 8, Blue Cross Blue Shield of Massachusetts ("Blue Cross") has partnered with the Cities of Boston, Cambridge and Somerville and the Town of Brookline to unveil a fleet of 50 Blue Cross Proud bikes, wrapped in a rainbow pride-themed design. The bikes will be featured in the parade and then integrated in the Bluebikes fleet through the end of June. Blue Cross is the title sponsor of Bluebikes, Metro Boston's public bike share system, and is a founding sponsor of the Massachusetts LGBT Chamber of Commerce.

As part of the month-long celebration of LGBTQ pride, Blue Cross will donate $1 to Fenway Community Health Center in Boston for every ride taken on Blue Cross Proud bikes June 8-30 and Lyft, which operates Bluebikes, will match the total donation amount. Blue Cross is a sponsor of Fenway Health, whose mission is to enhance the wellbeing of the lesbian, gay, bisexual and transgender community and beyond through access to the highest quality health care, education, research and advocacy.

"We're proud that Blue Cross is continuing its longstanding commitment to supporting the LGBTQ community in this unique, meaningful way," said Chris Roffey, president of Blue Cross' BluePride employee resource group. "We're thrilled to have so many BluePride members participating in the parade and we look forward to helping Fenway Health continue its important work to make life healthier for the LGBTQ community and the broader population."

Blue Cross was a key participant in Boston's first-ever transgender job fair to actively recruit LGBTQ employees, and places a strong emphasis on transgender and LGBTQ health education among its employees and members.

"As members of the LGBTQ community prepare to celebrate Boston Pride, Fenway Health is delighted to partner with Blue Cross for the month of June," said Jane Powers, Acting CEO of Fenway Health. "We are grateful that every ride taken on the 50 Blue Cross Proud bikes will generate support for Fenway's critical medical care, research, education and advocacy programs."

The pride-themed bikes were designed by Matthew Sarcia, strategic design manager at Blue Cross. Following the parade and through the end of June, the Blue Cross Proud bikes will be placed in circulation within the more than 260 Bluebikes stations across four municipalities that own the system: Boston, Brookline, Cambridge, Somerville, and its soon-to-be fifth member, Everett.

"As we continue to work with the municipalities and Blue Cross to expand Metro Boston's bike share program, we embrace opportunities to give back to the communities we serve," said Dominick Tribone, Lyft Bikes & Scooters Market Manager for the Boston Metro Area. "We're pleased to be able to contribute to Pride Week through the presence of themed Bluebikes in the parade and our matching donation to Fenway Health."

Blue Cross is in the second year of a six-year Bluebikes title sponsorship, which launched on May 16, 2018. Through its partnership with the municipal owners of Bluebikes, Blue Cross is supporting continued growth and expansion, including system upgrades, additional bikes, new mobile app features and station expansions to create increased access. By the end of 2019, the five municipalities will own more than 3,000 bikes and 300 stations.

About Bluebikes
Bluebikes is public transportation by bike. Owned and jointly governed by the municipalities of Boston, Brookline, Cambridge, Somerville, and soon Everett too, Bluebikes offers a fast, fun, and affordable transportation option. Users can ride any of the 2500+ bikes to and from the 260+ stations across the region. By the end of 2019, the municipalities will provide more than 3,000 bikes and over 300 stations for their residents, workers, and visitors. Since launching in 2011, more than 8.8 million trips have been taken on Bluebikes, including more than 680,000 trips so far in 2019.

About Blue Cross Blue Shield of Massachusetts
Blue Cross Blue Shield of Massachusetts (bluecrossma.com) is a community-focused, tax-paying, not-for-profit health plan headquartered in Boston. We are committed to the relentless pursuit of quality, affordable health care with an unparalleled consumer experience. Consistent with our promise to always put our members first, we are rated among the nation's best health plans for member satisfaction and quality. Connect with us on  Facebook, Twitter, YouTube, and LinkedIn.