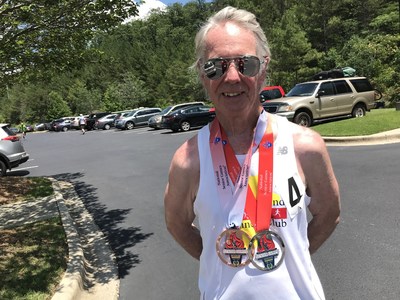 Greg Tooker with some of his medals from the Senior Games.

BOSTON, June 22, 2017 /PRNewswire-USNewswire/ -- Greg Tooker started running at 38 after he realized that a sedentary lifestyle combined with long days of travel and client dinners caused him to gain weight and have back problems. And he's been running for the 38 years ever since.

The 76-year-old Wrentham, Mass., resident and Blue Cross Blue Shield of Massachusetts member will be competing in this weekend's 27th Massachusetts Senior Games. Tooker entered the games seven years ago at the suggestion of his neighbor and has won numerous medals across several track and field and road race events. He's even gone to the national games and won four medals. Now he volunteers his time as Vice Chair of the Massachusetts games. "When I see people running a 5K at age 93 or 94, it makes me want to continue to push myself," he said.

The Games is a nonprofit, volunteer organization formed in 1991 that features over 1,000 competitors 40 years and over in five-year age groups participating in year-round Olympic-style winter and summer events like skiing, hockey, basketball, swimming, and track and field. The majority of the summer events will be held on "Super Saturday" June 24 at Springfield College. For the full list, visit www.maseniorgames.org.

Blue Cross Blue Shield of Massachusetts (Blue Cross) is proud to sponsor the Games with Springfield College. "At Blue Cross, we know there is a direct connection between physical activity and overall health, and we are thrilled to be part of the Games, which encourages individuals to be active at any age," said Blue Cross Senior Vice President of Sales & Account Service Debra Williams. "We wish all of the athletes good luck with their events!"

Like Tooker, many of the participants are Blue Cross members. "Blue Cross has been with me every step of the way through most of my working life and then in retirement when I needed supplemental Medicare coverage, including during a cancer scare in 2002," Tooker said. He believes everyone can improve their life by getting active and has inspired his family to start running. His three children and 13-year-old granddaughter are all runners.

Games Board Chair Davis Cox is living proof that it's never too late to get in the game. At age 74, he weighed 250 pounds, took medication for diabetes, and suffered a stroke. "I was headed in the wrong direction, and I knew if I didn't change something my days would be numbered."

The Northborough resident heard about the Senior Games and went from channel surfing on the couch to competing in the pentathlon. Now four years later, he's lost 60 pounds, no longer takes medication for diabetes, and feels younger than ever, while also winning 11 medals. "The Games saved my life," Cox said.

He wants to help more people get involved because "Life is just more fun when you feel healthy" and because "The best part of the Games is that you don't have to come in first to win."

Blue Cross is committed to encouraging healthy and active lifestyles among people of all ages in cities and towns across the Commonwealth. Last year, our company and foundation invested $10 million in over 500 nonprofits throughout Massachusetts that promote healthy living.

About Blue Cross Blue Shield of Massachusetts
Blue Cross Blue Shield of Massachusetts (bluecrossma.com) is a community-focused, tax-paying, not–for–profit health plan headquartered in Boston. We're the trusted health plan for more than 25,000 Massachusetts employers and are committed to working with others in a spirit of shared responsibility to make quality health care affordable. Consistent with our corporate promise to always put our 2.8 million members first, we're rated among the nation's best health plans for member satisfaction and quality. Connect with us on Facebook, Twitter, YouTube, and LinkedIn.